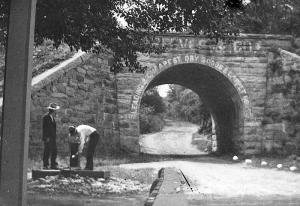 This overpass was built for the Troy and Schenectady Railroad around 1862.  It passed over the old Balltown Road.  It was later replaced by a newer underpass in 1910 when Balltown Road was rerouted.  The men on the left are getting water from a pump.  This photograph was taken in the early 1900's from the rear porch of the Craig Hotel.

Looking west along the Troy-Schenectady Road in the 1890's, the King home is on the left.  Charlie Marks's blacksmith shop and house are to the right.  The person in the buggy may well be Nick Van Vranken, who had been Town Supervisor from 1869 to 1870.  Later the development of paved roads and automobiles made it possible for Niskayuna residents to travel throughout the capital region to work and shop. 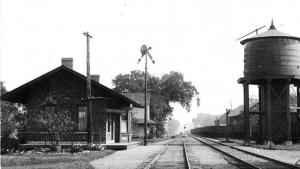 The railroad station near the eastern end of Rosendale Road in Nisakyuna was built by the Troy and Schenectady Railroad in 1834.  It later became part of the New York Central Railroad.  The station was constructed using local lumber and bricks made in Niskayuna.  The water tank was removed in 1925 as was the privy behind the station. 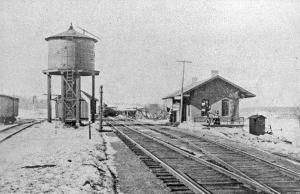 An earlier view of the railroad station, facing west.  This property is now part of Lions Park and also a popular stop on the Mohawk-Hudson Bike Hike trail, which was built on the original railroad bed. 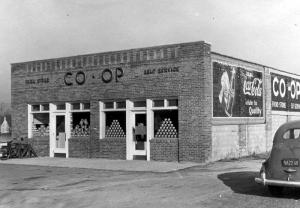 The Niskayuna Consumer's Co-operative on Nott Street near Balltown Road was organized in 1941 by 300 area residents, led by Abraham Lincoln Marshall (1896-1974), manager of the GE Chemical Research Department.  Shares were sold, and the building was constructed of donated bricks for $12,000.  For over 60 years, it has been a Niskayuna institution, a relatively small neighborhood market whose shoppers know one another and consider it an unofficial community center.

The Grand Boulevard Fire Company, now part of Niskayuna Fire District No. 1, was formed in 1920.  It gradually expanded to serve a much larger section of the Town.  The company's first motorized vehicle, show here, was a converted Studebaker touring car placed in service in 1930.  It was housed in a garage on Myron Street. 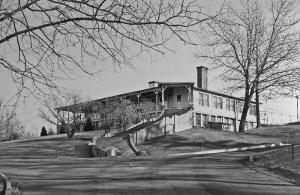 This building, constructed as the American Locomotive Club in 1908, has had five owners, each with interesting stories to tell but not all happy ones.  This photograph shows the building as the Niskayuna Club in 1968, about two years before its nine-year run ended in bankruptcy.  In 1970, Union College bought the club and 42 adjoining acres with a gift from Union trustee and alumnus W. S. Girling, class of 1917.  Union College named it the Wallace S. Girling Center in his honor.  He died in peace five months later.  In 1990, Union College sold the now 50-acre parcel to the Lawrence Insurance Group, which removed the grand outdoor staircase, converted the interior to office space, and leased the outdoor pool to the Town.  Owner Albert Lawrence considered the site to be his company's world headquarters, but business turned sour, and he sold the premises to the Town in 1998 for $400,000.  The outdoor skating rink is gone, but the pool survived, and the building has become the Town's Recreation and Senior Activities Center. 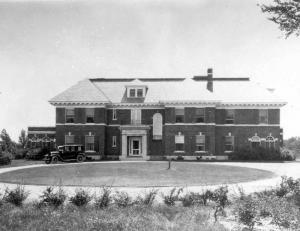 Here is the Bellevue Woman's Care Center of Ellis Hospital at 2210 Troy-Schenectady Road.  Built in 1920 as a summer home by Charles W. Stone (1874-1938), this elegant Georgian manor was converted into a women's hospital in 1941 by M. Grace Nordlund Jorgensen, RN, who founded the Bellevue Maternity Hospital in 1931.  After a newer building was erected in 1973 to serve as a birthing facility, this structure was divided into offices for the hospital's doctors and administrators. 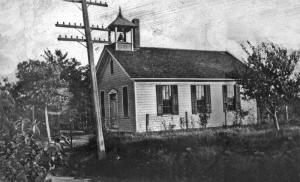 The original Rosendale School was one of four common schools that served Niskayuna from 1812 until the early 1900's.  Rosendale students used this building until 1932.  Construction on today's Rosedale School began in 1955.  This building later became the Niskayuna Grange Hall, located at the entrance to the Lisha Kill natural area.  The Grange disbanded in 1988 and gave the building to the Town.